These past few weeks, we have shown you the ancient art of lacquer painting in Vietnam and the home of the famous works of Gustav Klimt in Vienna. This week, I would like to show you a place where you can learn a thing or two about the most fundamental element of Islamic art, which is Islamic calligraphy.

Come on! Let’s go and take a peek inside the Qur’an and Manuscript Gallery of the Islamic Arts Museum Malaysia! 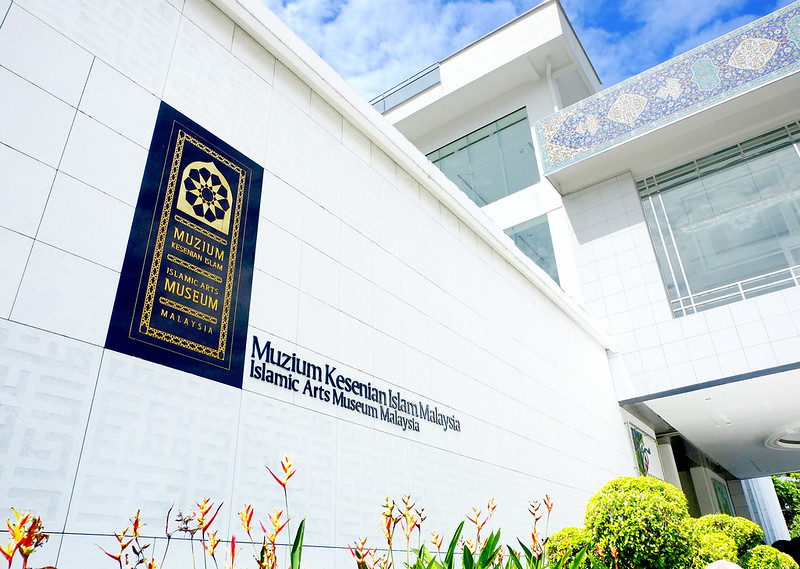 Upon entering the gallery, I was welcomed by multitudes of cases housing various books, manuscripts and scrolls in all shapes and sizes. 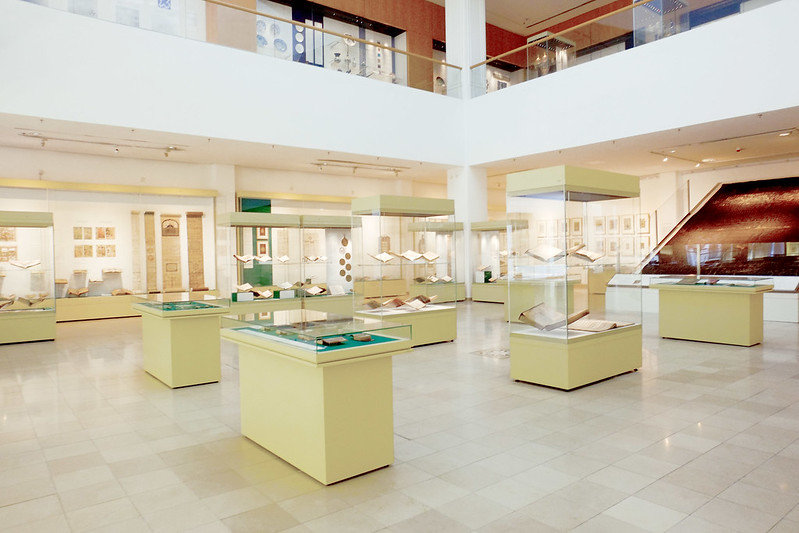 Then, my eyes were immediately pulled to the right side of the room as I noticed a huge brown cloth. (If you look at the photograph below, it is the huge brown block in the upper middle part.) It is a portion of what is called The Kiswa, a cloth that covers the Kaaba in Mecca. And the amazing thing is that the whole thing is embroidered with writing that were artfully arranged. 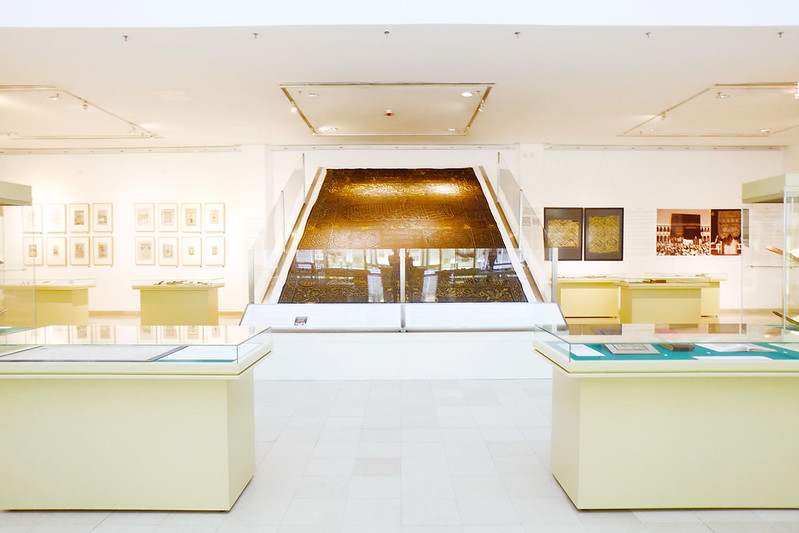 Oh, and when I looked up, I saw this wonderful intricate inner dome. 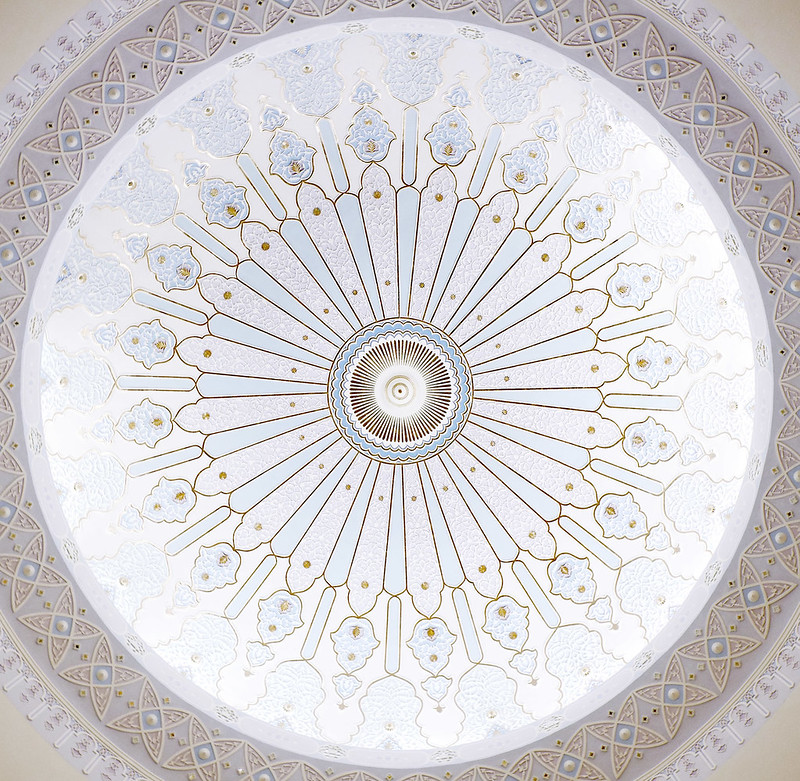 After being floored by the Kiswa, I looked at the cases in the gallery one by one. The gallery was filled with beautifully written literature (mostly Qur’an) by celebrated calligraphers from North Africa to Middle East. There are even works that are dated way back from 9th to 10th century AD (3rd to 4th century AH)!

There were a couple of Qur’an that showcase beautiful minimalist writing. And then there were books that are adorned with so much gold and color that I cannot help but be mesmerized! Just look at the details! 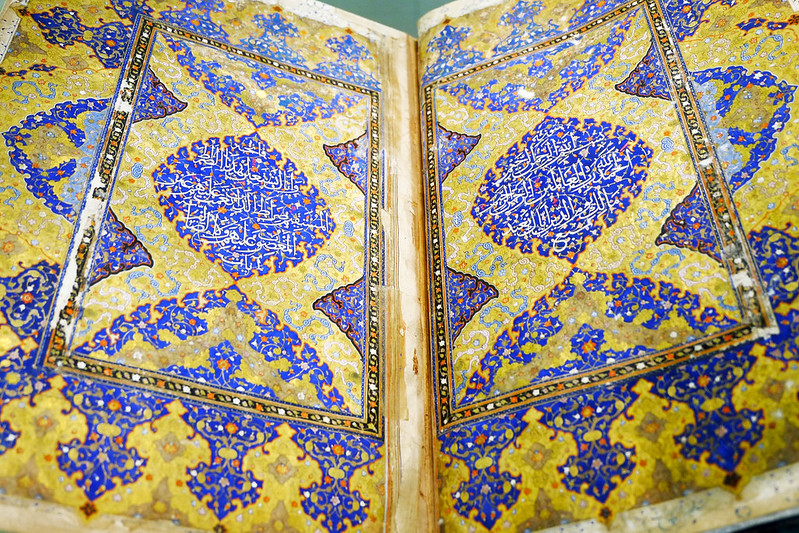 Generally, the degree of ornamentation of the Qur’an is dictated by the patron’s budget of the calligrapher and the geographical location. In India, Persia and the Ottoman Empire, a high value is placed on embellishment. However, at the western end of the Islamic world, some of the original starkness remained. The flourishes! The colors! The amount of gold! 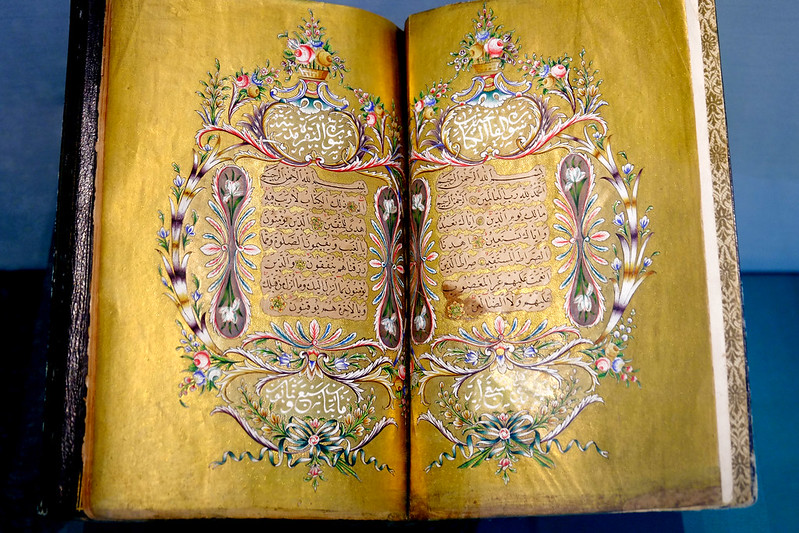 At the different part of the galley, there were scrolls and manuscripts displayed. All beautifully written, of course. 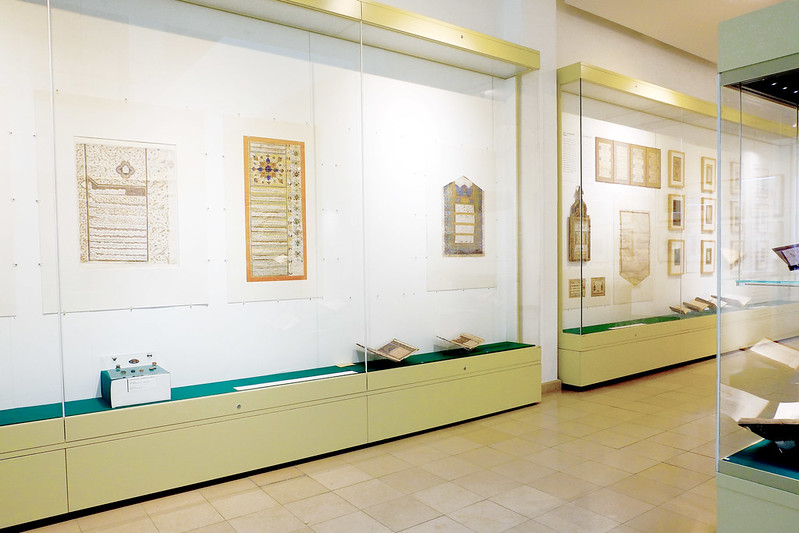 What amazed me at this part of the gallery is a case containing the calligrapher’s license and diploma! Yes, they have a license to write! (No doubt that the licenses were also beautifully written and decorated.)

An ijaza is a certificate granted to students who have achieved competence in writing Arabic calligraphy. It demonstrates their ability and skills to write single and conjugated letters and also to understand the rules of heights and dimensions of each letter in different calligraphic styles. It is a custom for the master and other master calligraphers to pen down their signature at the bottom of each ijaza. Usually written in two calligraphic styles, Thuluth and Nashkh, this certificate serves as a license for a calligrapher to execute variety of works, such as transcribing manuscripts, writing letters and documents, as well as composing calligraphic folios, thus allow him to sign his works with Arabic phrases like ‘katabahu‘ (written by) or ‘hararahu‘ (composed by).

Aside from embroidering writing on cloth and writing on paper, calligraphers also used leaves to spread Islamic word. The leaves were gilded and pierced to display Qur’anic calligraphic composition. (The leaf shown below is signed by the renowned calligrapher, Omar Vasfi.) 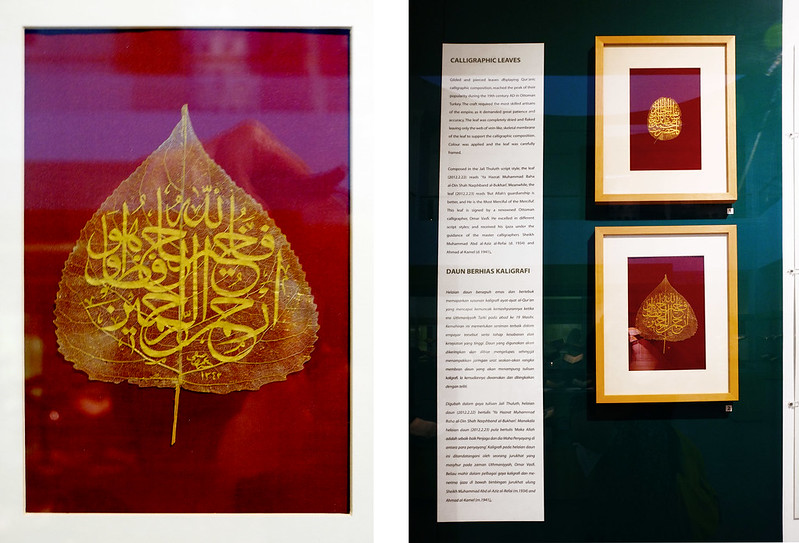 Aside from the Holy Word, poems were also written artfully. Sometimes, they even have illustrations. I saw this illustrated page of Khamsa (a Quintet written by Nizami Gajavi). 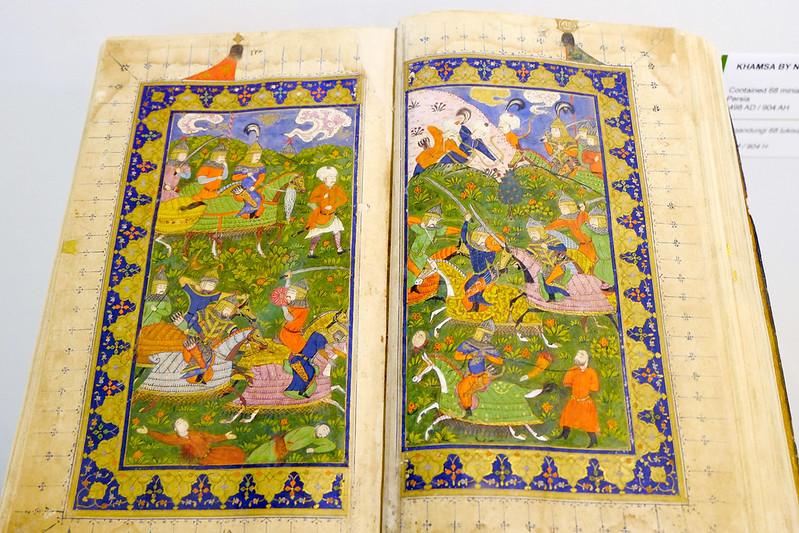 Lastly, a calligrapher is incomplete without their tools! The gallery also showcased various calligrapher tools like the pen box, inkwell and bookbinder. Aside from being practical, they are objects that have a beauty in their own right. A 15th century writer, Al-Qalqashandi, refers to the inkwell as the “Mother of all Tools”. He also said that a scribe without his inkwell is compared to a man who enters a fight without a weapon.

In the photograph below, pen boxes (made from various materials like silver, brass, lacquered, inlaid, ebony and bone) are shown with their corresponding ink well. *Drool* 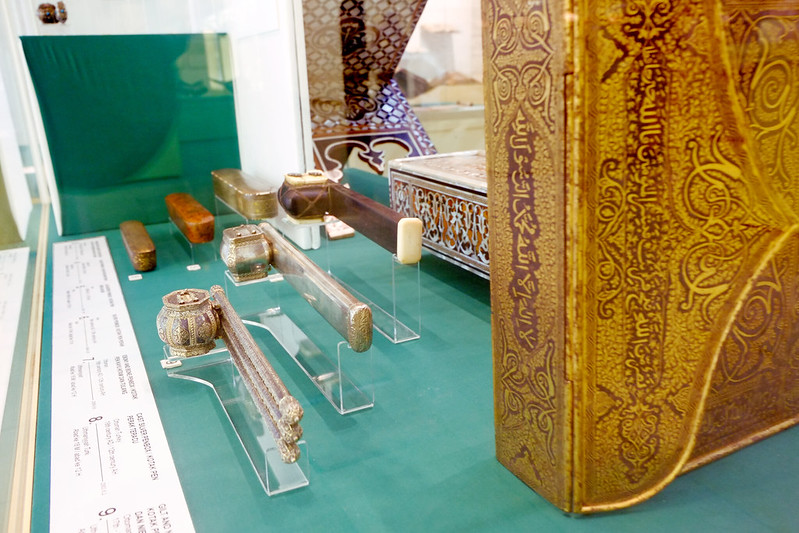 Below, there are more beautiful ink wells!

In the gallery, this was my favorite pen box and ink well! 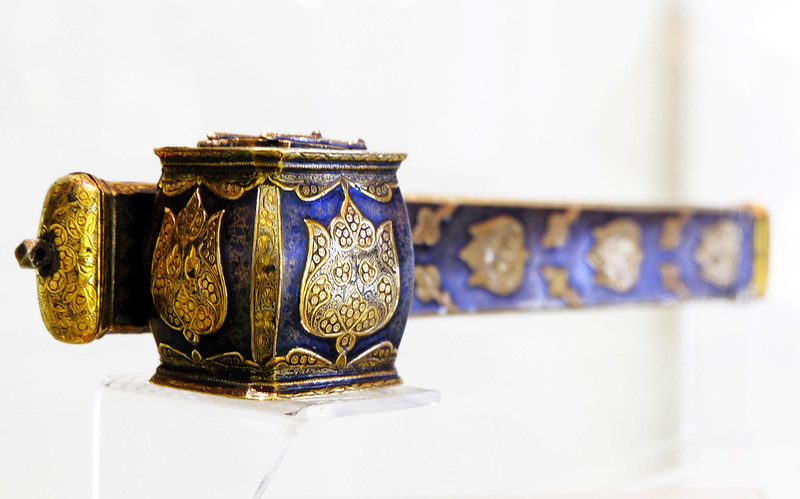 That’s it for now! Watch out for our next adventure in the art world! 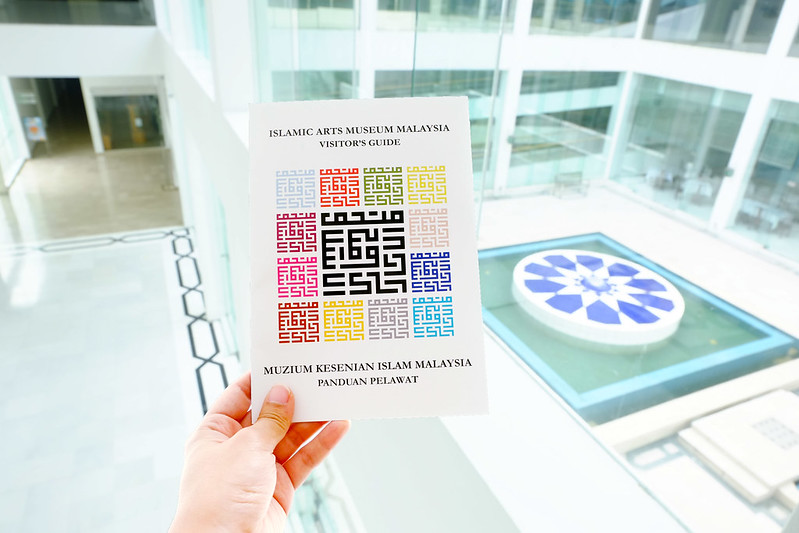 “Islamic Arts Museum Malaysia was established in December 1998 as a response to the rapid growth of interest in Islamic art. Reflecting this awareness, Malaysia became home to Southeast Asia’s prominent museum dedicated to being a custodian, collector, preserver and educator of Islamic art. The building occupies an area of 30,000 square metres, situated amid the leafy surroundings of Lake Gardens in Kuala Lumpur. The Islamic Arts Museum Malaysia houses more than 9,000 artefacts, as well as having an exceptional library of Islamic art references. The collection on display ranges from the tiniest pieces of jewelry to one of the largest scale models of Al-Masjid al-Haram in Mecca. The aim is to create a collection that is truly representative of the Islamic world, with an emphasis on Southeast Asia and China. The museum houses 12 permanent galleries, two special galleries and an open space gallery dedicated to photography exhibitions. Among the most interesting galleries are the ‘India, China and the Malay World’ galleries, which are in an exceptional category. Other parts of the collection are displayed according to type rather than geographical origins.”

Museum Restaurant
Tuesdays to Sundays: 10am – 6pm
Closed on Mondays

One thought on “Where Art Thou: Qur’an and Manuscript Gallery at I.A.M.M.”