In my recent trip to Vietnam, I couldn’t help but notice: decades of war influenced this country a lot. Most of the must-see destinations in Ho Chi Minh City, south of Vietnam, are giveaways to this. It’s really obvious, especially for places like the Notre-Dame Cathedral Basilica of Saigon and the Saigon Central Post Office showcasing its French and Gothic/Renaissance/Romanesque influences — going back to the days when Vietnam was part of the French Indochina in the late 19th century.

You can also see some cultural and social evidences in present-day Vietnam from the twenty-year war during the 50’s (up to the 70’s) as it left a very serious ecological and human impact. In War Remnants Museum, I learned about Agent Orange, one of the major herbicides used during the war, and how it left the Vietnamese with various diseases and disabilities due to the very harmful chemicals. It was a really depressing time, the war, and I can’t help but *sigh* and just… I don’t even know how I got through all those photographs. Leaving the museum gave me really heavy boots.

Two days after, the heavy boots became a little bit lighter than when I left the museum.  We were taken, as part of our guided tour to Cu Chi Tunnels, to a small lacquer painting shop in the countryside called Handicapped Handicrafts. Products from this shop were all created by handicaps, most of which were war victims who still want to earn a living but are no longer eligible for work in offices and other forms of work. It made me even more inspired when I learned that the ancient art of lacquer painting is not so ancient after all.

Lacquer painting is a famous ancient art in Vietnam said to have been found in ancient Vietnamese tombs dating back to the third and fourth centuries for the purpose of decoration and preservation. It was fused with French techniques later during the 30’s and was then considered as a distinct form of fine art painting in Vietnam known as sơn mài. 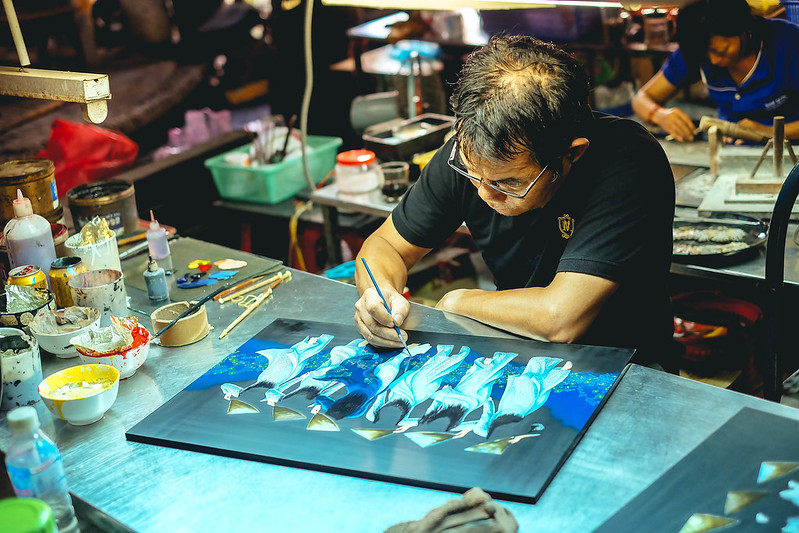 The finished products undergo a very long, challenging, and complex process — so complex it qualifies as one of the finest and most impressive forms of art in the country.

Initially, a piece of wood is primed and coated with paint to become the canvas. The egg shells or the mother of pearl are laid out in detail based on a design, painted, lined, coated, varnished, and polished to produce the final product. 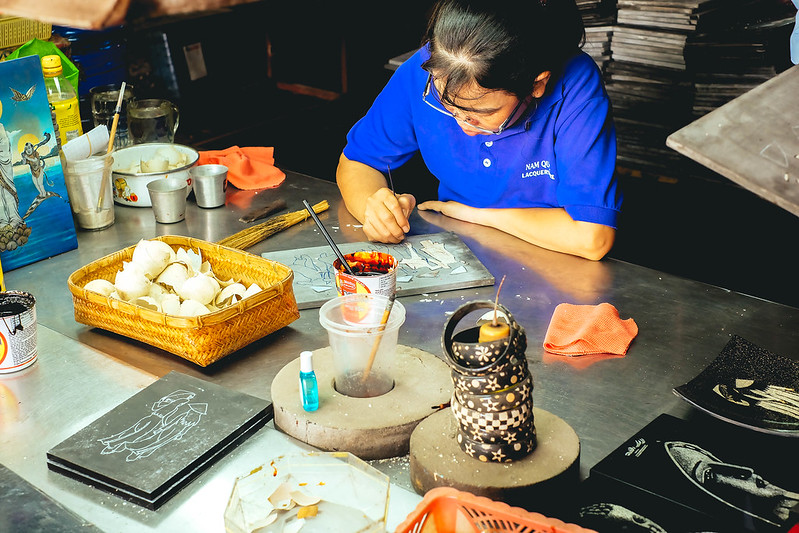 Tiny pieces of cracked egg shells are manually laid out piece by piece using a tweezer.

Some designs involve painting the shells with different colors while some still retain the original whitish color of the egg shells. 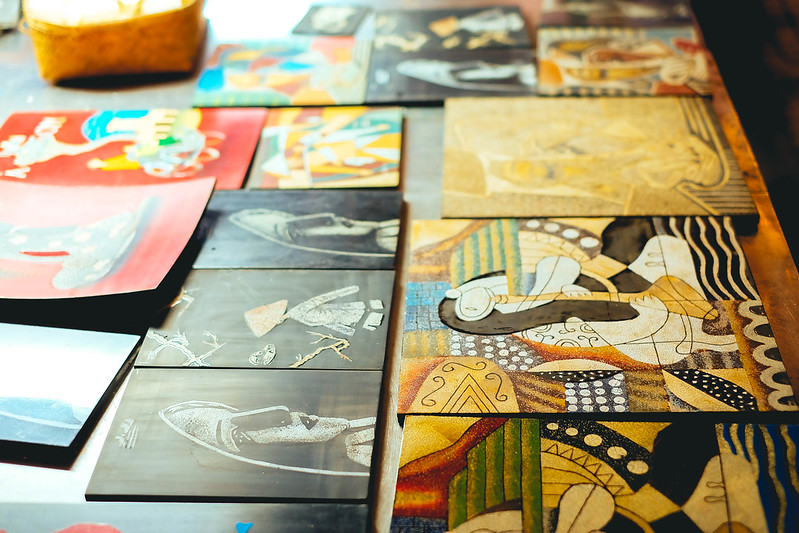 Inlaid egg shells and mother of pearl are lined with black lacquer. 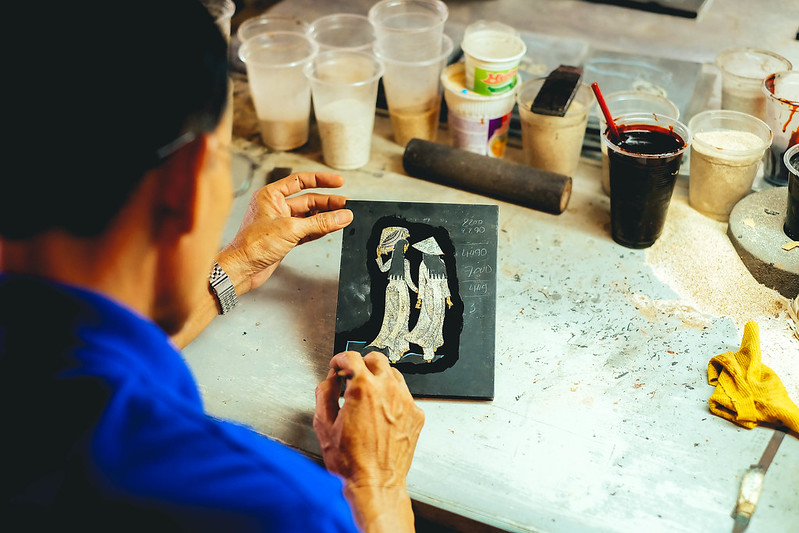 The medium is extracted from the cây sơn tree harvested in the same way as rubber, letting the sap flow through an incision. Fresh lacquer is white. It turns to brown when exposed with air. The black lacquer, on the other hand, is formed from a chemical reaction with iron, achieved by stirring the sap with an iron rod for days until the desired color is achieved. 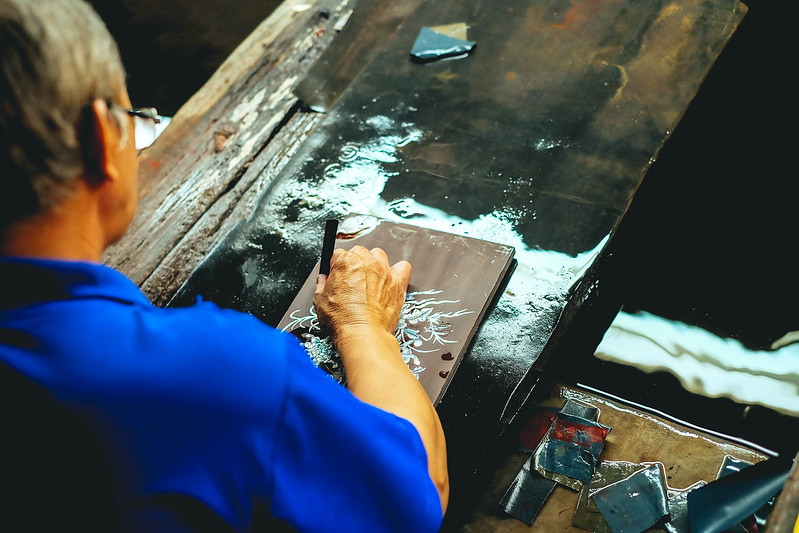 Adding of final touches and other details to the design before it gets sealed by varnishing. 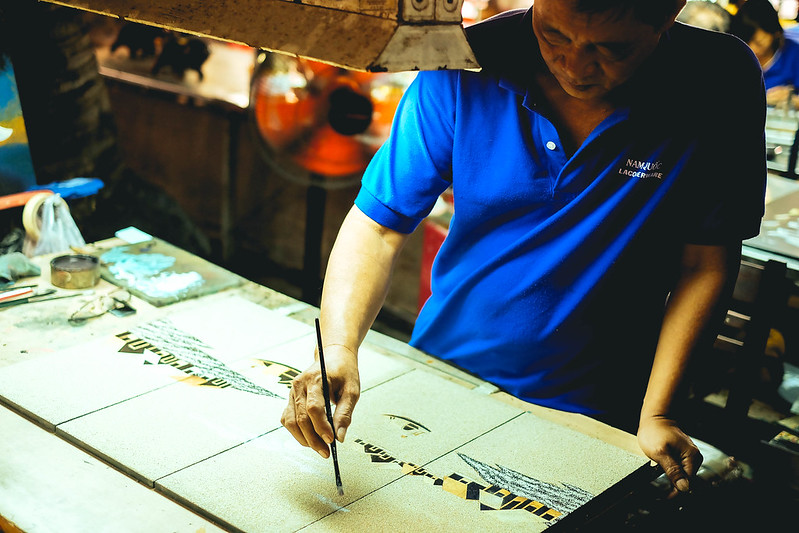 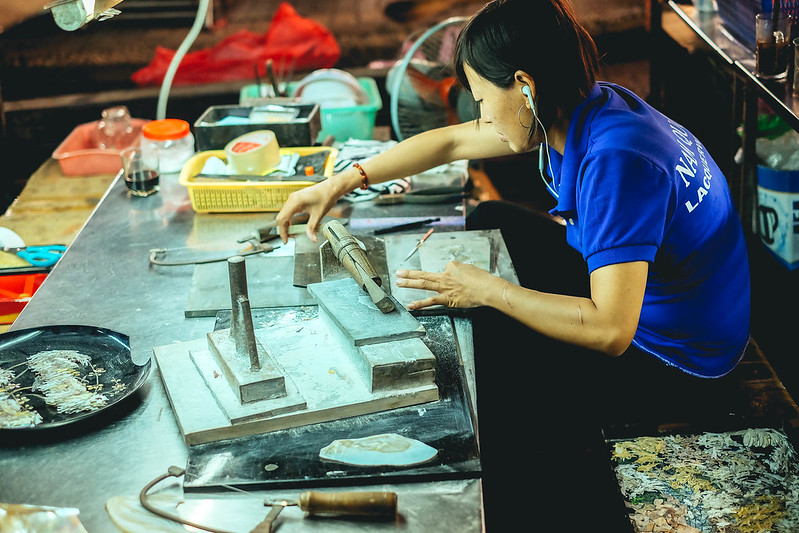 Some layers are polished more than the other layers to create emphasis or a greater level of detail. 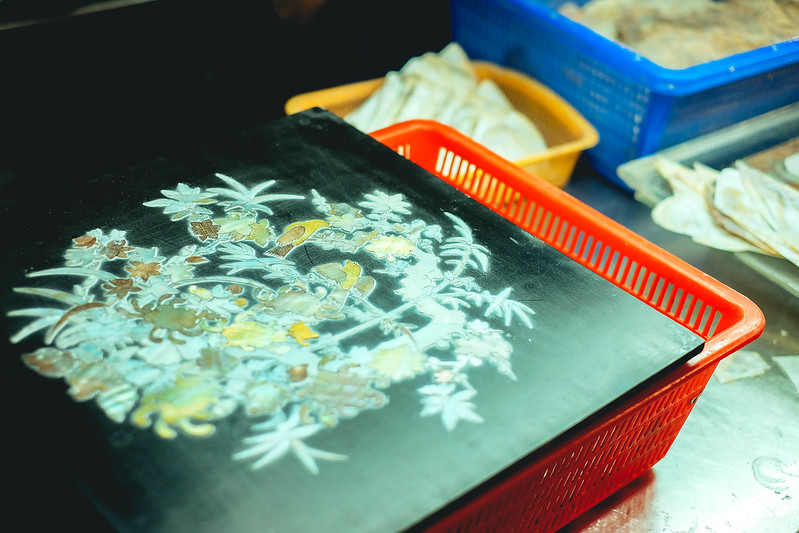 A sample of a final polished piece is shown on the bottom left corner. 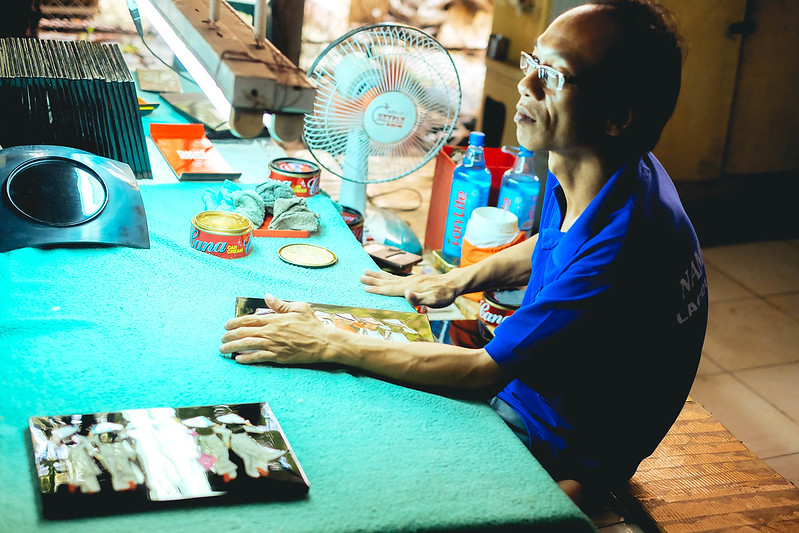 It’s a very long manual labor. If you look at the production process board below, you wouldn’t believe that these people were able to make such complex and intricate pieces in a nick of time. 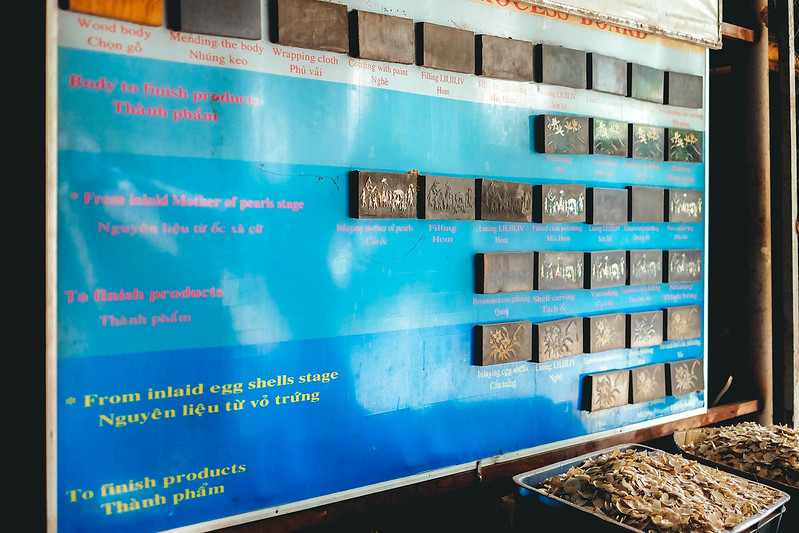 To give you an idea of the other products, I took a photo of some almost-done pieces — jars, mini globes, plates, and frames. 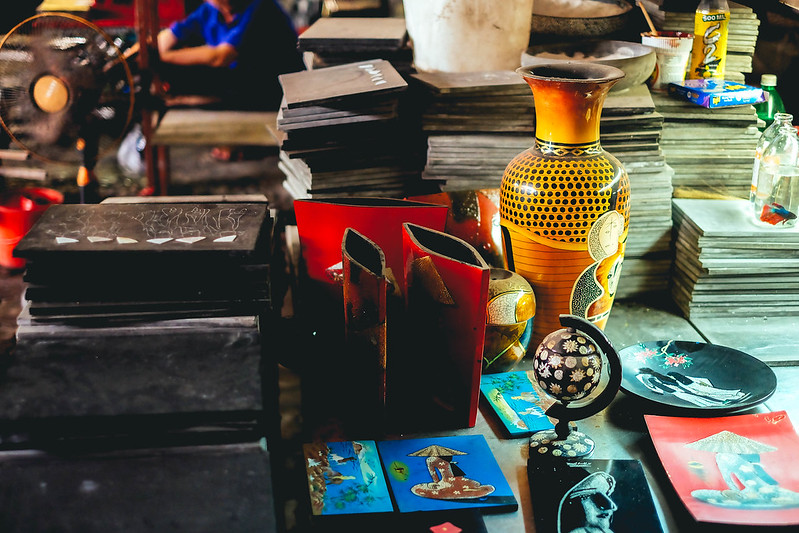 At the last part of the shop tour, we were taken to a gallery of finished products where, unfortunately, photography wasn’t allowed. The good thing about this is that you can see these lacquer paintings for sale all around the city. I was in awe looking at all the quality pieces that I wanted to take home a piece as a souvenir. The price was way beyond my backpacker budget so I had to pass that day with regret. (I’ve not given up. I’m getting one on a return trip!)

One thought on “Where Art Thou: Saigon Handicapped Handicrafts”